Following the release of Flying Circus Volume 1 1C Games studio’s have also released Tank Crew – Clash at Prokhorovka into early access. As is with Flying Circus Vol 1 this is very much an early access title and at launch today will only include two tanks – the formidable Russian Kv-1s and Germany’s fearsome PzKpfw. VI Ausf.H1 “Tiger” which was commanded by such notable tanks commanders as Michael Wittmann and Paul Egger. Over the next 14 months of development the team will release a further 8 tanks used on the Eastern Front which will include:

The team have also announced they plan to bring some AA vehicles into the game as a separate DLC and have already identified the GAZ-MM + 72K and Sd. Kfz. 10 + Flak38 as being vehicles they want to bring to the game. As with Flying Circus the development for Tank Crew is also being done by and external team with the assistance of the IL-2 development team and for Tank Crew the team is called DigitalForms who are based in Saint Petersburg, Russia.

One of the benefits of sharing the game engine with IL-2 is that along with the 10,000 sq. km. map of the battle area around Prokhorovka Tank Crew can also be played on any existing IL-2 map which will create fantastic joint multiplayer with tanks and planes on one server. For multiplayer you can multi-crew with up to four playable stations in each crew – Commander, Driver, Gunner, Radioman/Machine-gunner wit the interiors all faithfully re-created in 3D

You can buy Tank Crew – Clash at Prokhorovka here at the official IL-2 store. 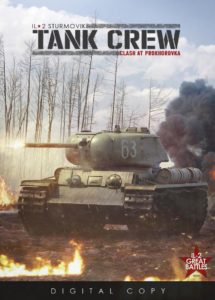